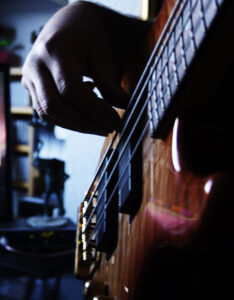 Mark Fishlock is a songwriter and composer, specialising in music for English Language Teaching productions.

He is also a musician, playing bass for a number of bands, including the David Bowie tribute act Pop-Up Bowie. He has worked as a journalist, sound engineer, scriptwriter, radio presenter, and voiceover artist.

Born in Croxley Green, Hertfordshire, Mark grew up in Surrey and attended Surbiton Grammar School, before going on to complete a foundation course at Wimbledon School of Art. He turned down an offer to study sculpture at Canterbury, deciding instead to pursue a career in music, first as guitarist for the prog rock outfit Scion and then with his own band Panama Park. During this time he also worked as sports editor for his local newspaper, The Esher News and Mail.

After leaving the paper he got a job as a sound engineer at Dick James Music Studios in Holborn, where he worked with Haircut 100, Patti Palladin, Psychic TV, and the film director Derek Jarman. He also edited the infamous Troggs Tapes when they were released as an EP in 1984.

When DJM closed down, he set up an eight track studio at home and began writing music for television, corporate and sell-through video, commercials, library, radio, and live events.

A chance meeting with producer James Richardson took him back to songwriting, this time for the ELT market. He has since written over 2,500 songs for UK and international publishers, including Macmillan, Oxford University Press, Pearson, and Cornelsen.

He was a founder director of the new British Academy of Songwriters, Composers and Authors, which was formed following the amalgamation of three genre-based guilds in 1999. He served on the board for 15 years and was also a director of British Music Rights, the political lobbying body and forerunner of UK Music.

For 11 years, he wrote the script and produced the audio for BASCA’s prestigious Ivor Novello Awards.

In 2014, he became a trustee of the PRS Members’ Fund, the UK collection society’s charity which provides financial and other assistance to songwriters and composers in need.